One of the hot topics among parenting circles is screen time. How much is too much? How young is too young? Is it linked or not linked to ADHD? Is it the root of all evil or is it not really that big of a deal?

The issue has also made its way into education circles. I recently overheard a conversation from colleagues about students’ attention spans and how they seem to be gradually declining, as observed over recent years. It seems in many ways that teachers have to keep finding exceptionally innovative ways to get kids excited and engaged in learning. When you’re competing with the exciting, fast-paced, and colorful graphics that kids are accustomed to being instantly gratified by in video games, TV, and apps, it’s no wonder that some seven-year-olds aren’t super enthralled with a “screen-free” lesson on plural possessive nouns.

The strong opinions that parents and teachers have about screen time led me to wonder if many actual kids themselves have any idea as to how screen time might be effecting them. Screen time is obviously regulated in many homes, and a child may be told something along the lines of, “Okay, time’s up, turn off the TV!” or “You get 30 minutes of video game time.” But does that child have any idea why? Possibly. Yet I’m willing to bet that there are a ton of kids who just think it’s unfair and aren’t too happy when Mom says it’s time to unplug. I always feel that children are more likely to be on board with just about anything if they have buy-in or at least a clear understanding as to why certain rules are in place.

I decided to have the kids read and write about screen time as we worked on the genre of Opinion Writing this trimester. Given the times they’re living in, I thought it would be an especially appropriate and meaningful topic for my students.

We started out with a class discussion about screen time. We talked about their experiences with watching TV and movies, playing video games, and going on computers, phones, and tablets. As you can imagine, the kids were engaged and highly interested in this topic that they could relate to because it is such a big part of their lives.

Then we moved into a discussion about the pros and cons of screen time (most of my kids were unfamiliar with the terms “pro” and “con”, so this was the perfect opportunity to introduce that vocabulary). Based on their own background knowledge, they came up with pros such as “you can get information from the Internet” and cons such as “it’s not good for your eyes.”

After they shared their own ideas, we did a Close Reading of an article about some more of the pros and cons of screen time for kids. My students did some annotating to help with their understanding of main ideas and important/unfamiliar words. 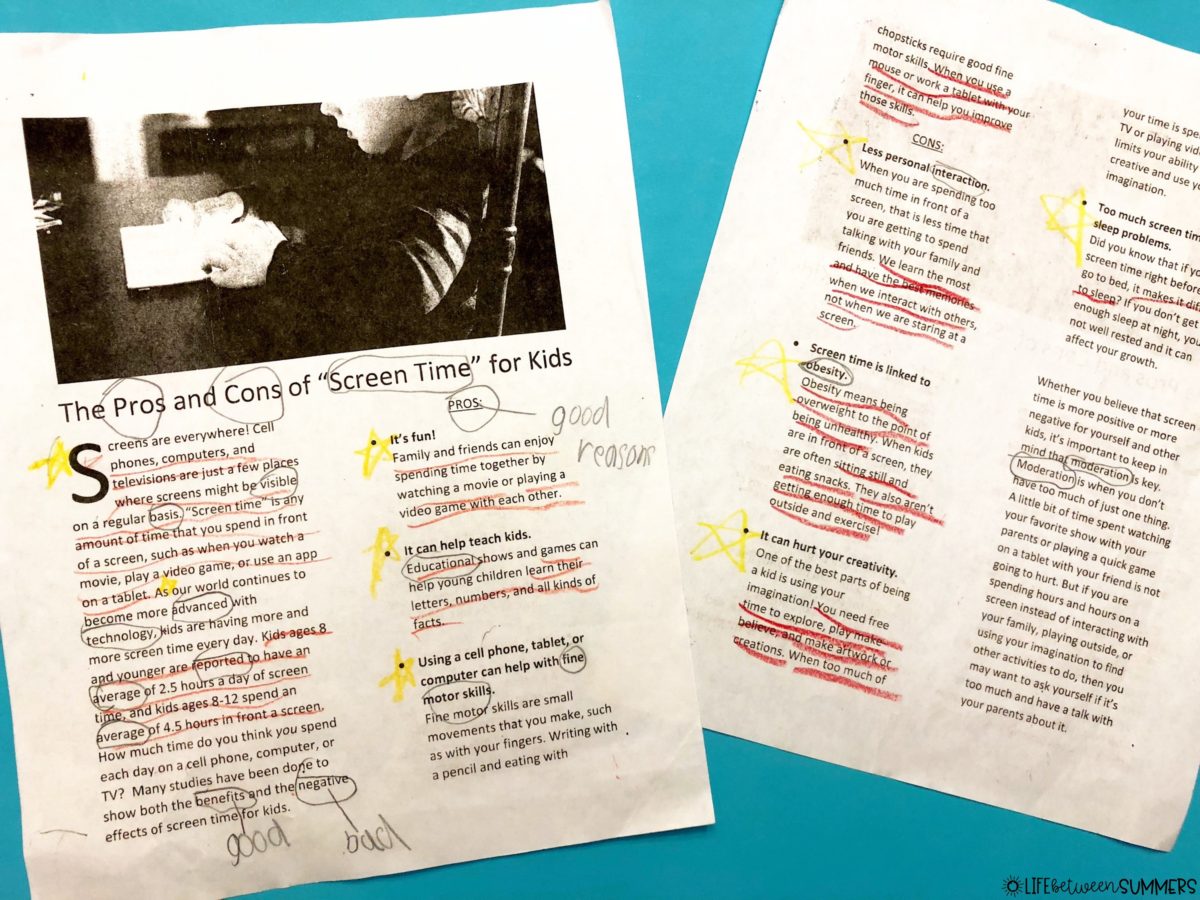 From there, we added the new information that we learned from the text onto our pros and cons chart. 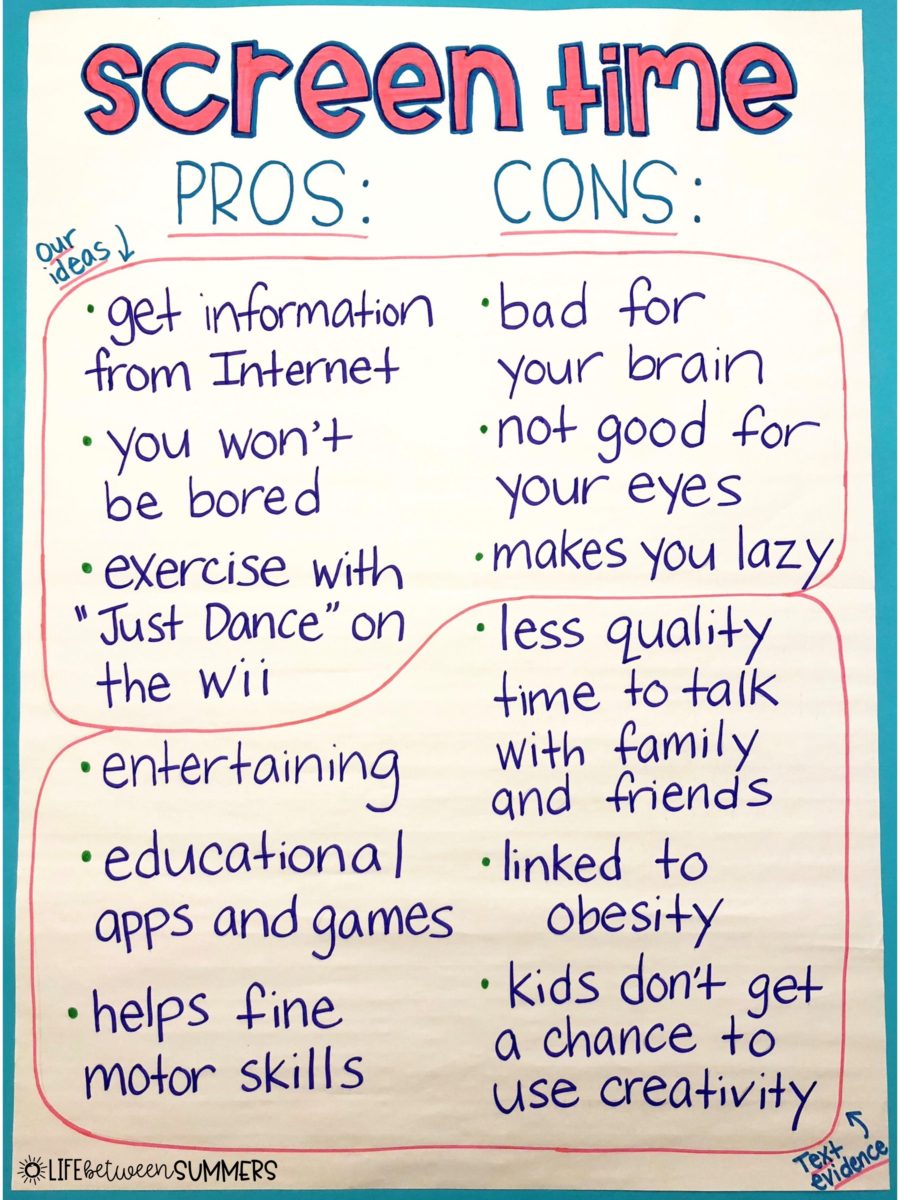 I then posed this question: “Do you think kids should be having more or less screen time?” I told the kids to consider all of the information they had discussed and read about, and to form their own opinion. Not what they thought the teacher wanted them to say, but what they actually thought was best for kids.

You may be surprised, but the vast majority of my second grade students chose less screen time. I honestly wasn’t sure what to expect because this was my first year trying out this lesson, but that’s truly what they came up with on their own based on the student-led discussion and the supporting evidence from the article.

Once the kids had each chosen their stance, we talked about how they would have to try to convince their reader why their opinion was the best choice. They looked back in the article and at our pros and cons chart for reasons to help support their opinion. After plenty of outlines, rough drafts, editing, revising, and so on, their paragraphs turned out beautifully! 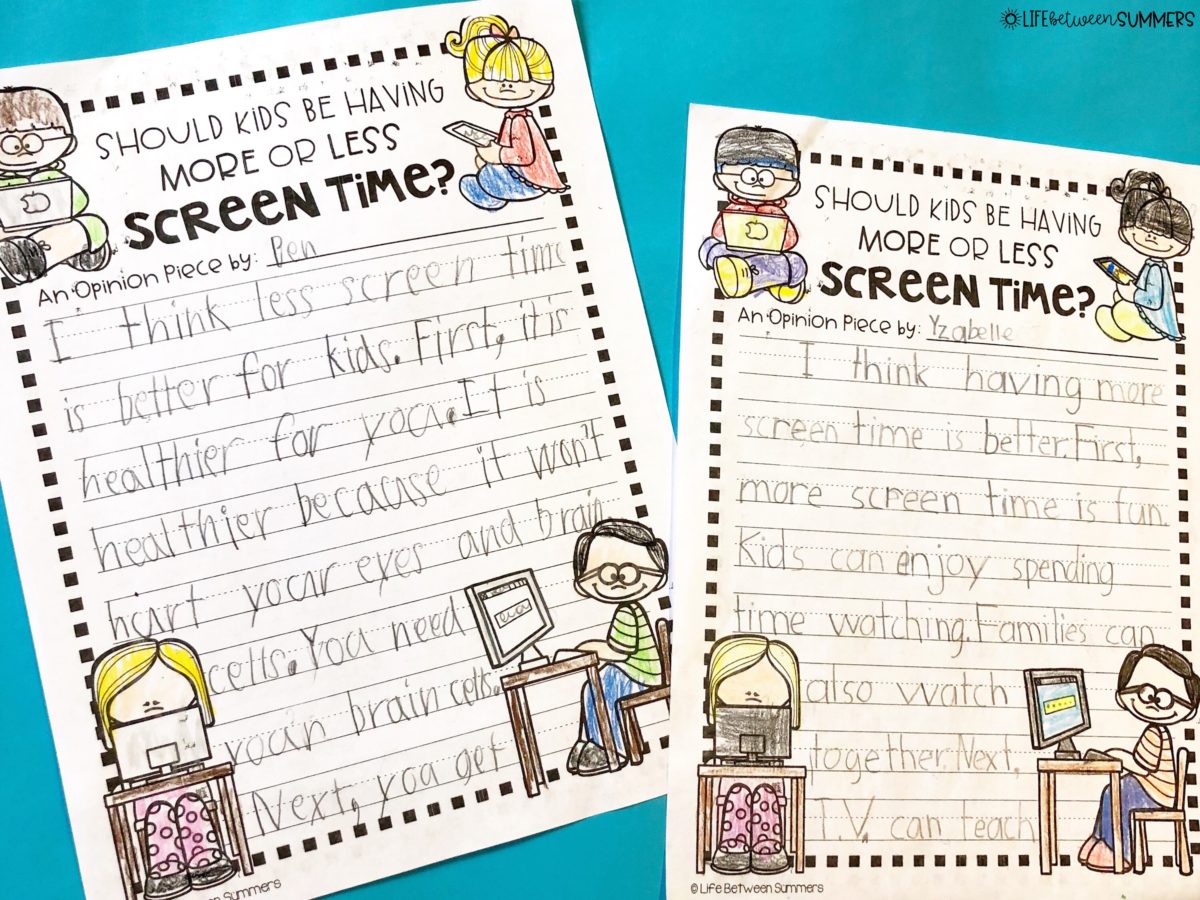 Now, the primary teacher in me wanted to include some sort of cutesy craft to display with our writing (especially since Open House is coming up soon). I wanted something both educational and eye-catching that we could showcase alongside our published writing. So, we made iPhones! 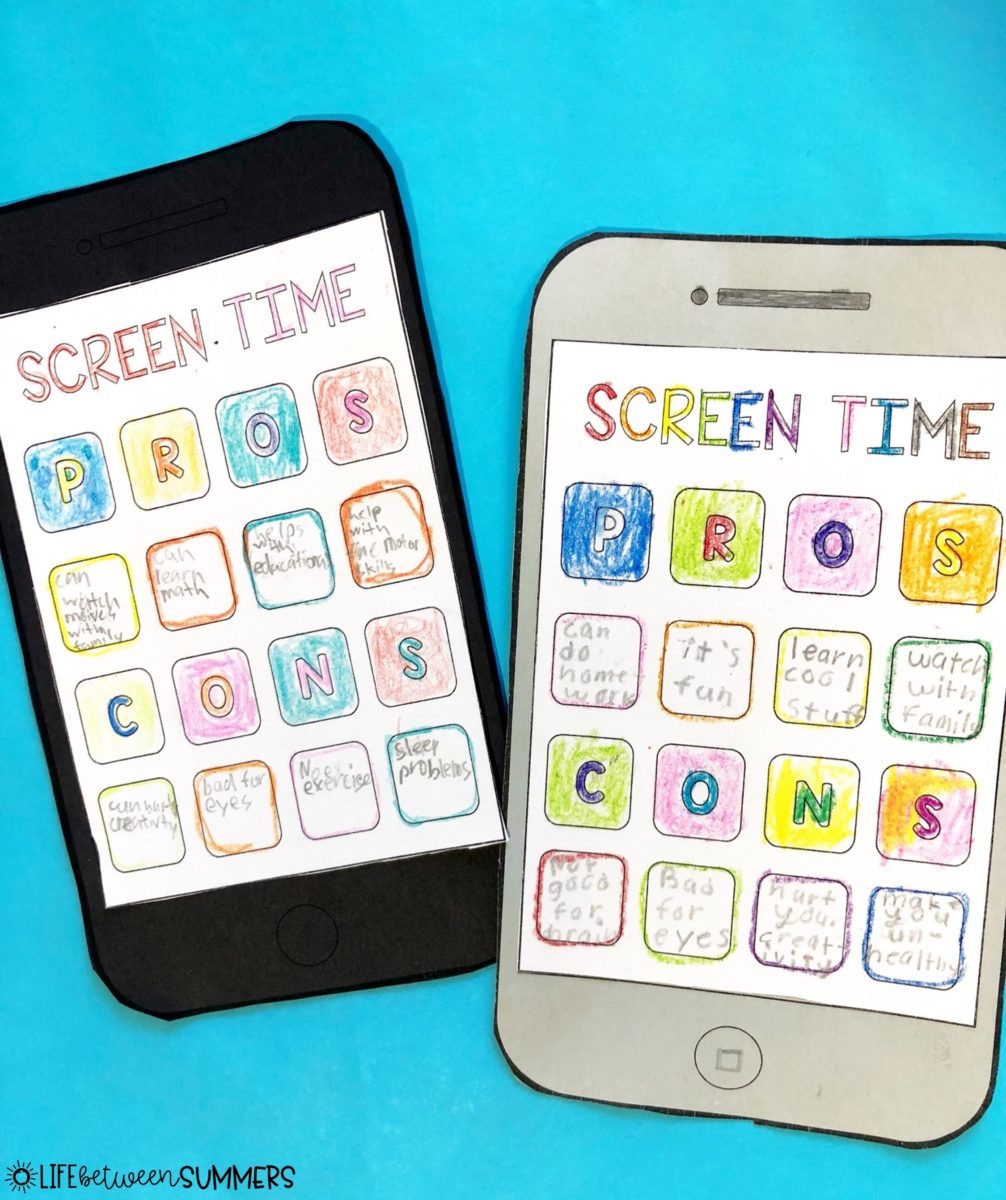 The kids were definitely into it, as shown by the fact that they wanted to pretend to talk and text on their paper phones. Once we quickly got that our of our systems, students had to write 4 pros for screen time and 4 cons against it. Each idea was written inside one of the icons on the screen. One student also asked if she could draw an apple on the backside of the phone- I told her to go for it.

If this is a writing topic you’d be interested in assigning to your own students, click here to get the screen time article, writing paper, and iPhone template in the Life Between Summers shop. It can also be found on Teachers Pay Teachers.

This activity helped my kids with reading comprehension strategies and allowed them to learn a lot about Opinion Writing by going through the whole writing process. But here’s hoping that they might have also taken away some real life lessons that could potentially stick with them. My teacher heart did grow a centimeter or two when a parent shared with me that their child asked the family if they could play a board game instead of watching a show, because they learned at school that screen time gives us “less personal interaction.” That right there told me that this is a reading and writing assignment worth repeating.

I shared this post last year and many of you messa

My daughters have been very into baking lately (gr

Is your head spinning from all there is to do comi

Sure we’ve been listening to Christmas music all

Want some ways to build class community during the

Oh what fun! Jenga Bells 🔔 is the perfect festi

SURPRISE!!! 🎉 Sandie Sonke Illustration & I just finished up the cover for our 4th book together, coming in 2023! 📙🥳In the past, I haven’t shared new book titles/covers until closer to the release date, but this time around I’d like to try and share more with you throughout the actual book-creating journey (sketches, sneak peeks, etc.) so here ya have it! 💞As you probably guessed by the title, this new one will be a follow up to Our Class is a Family! 🥰The premise:Kids have their immediate family that they live with, but extended relatives (grandparents, aunts, uncles, cousins, etc.) make up a special part of a family too! You can see where this is going- it’s similar at school! Students have their teacher & each other within their classroom walls, but they also have an extended family there to support them ❤️Specifically, all of the amazing people who are a big piece of the heart of a school:Librarians, speech pathologists, school counselors, administrators, custodians, school secretaries, reading specialists, cafeteria workers, and parent volunteers, just to name a few 🏫 And you’ll find them all represented in this new book! 🙌🏼 My hope for “Our School is a Family” is that it will help students feel extra safe, loved, & supported, and encourage kids to form positive relationships with (and show appreciation toward) the helpers at their school!I am so excited to share more about this book with you in the months to come!! 📖 P.S. Speaking of “months,” my very warmest congrats to Sandie, who is Society of Children's Book Writers & IllustratorsIllustrator of the Month! So very well-deserved!!! 🥂💗#ourschoolisafamily #ourclassisafamily #aletterfromyourteacher #shannonolsen #shannonolsenauthor #backtoschoolbooks #teacherreadaloud #schoollibrarian #schoolcounselor #speechpathologist #schoolcommunity ... See MoreSee Less

New book companion to go with Our Class is a Family! Class Family Memory Books for the end of the school year 📖💕This is a nice & simple writing activity for students to work on during those final weeks/days leading up to summer break 👌🏼 It’s a meaningful way to reflect on all their memories from the year, and they can take it home as a special keepsake on the last day of school! If you’re thinking you might want these memory books for your students, the timing couldn’t be better because they’re 25% off today & tomorrow (along with all other resources in my TPT store!) with the code THANKYOU22 💛 This comes available on its own, or in a discounted bundle with more extension activities for all 3 of my books 📚 I will share the link in the comments! 💕 ... See MoreSee Less

When this happens, it's usually because the owner only shared it with a small group of people, changed who can see it or it's been deleted.
View on Facebook
· Share

Check out these top 5 favorites from Lakeshore Learning! They are having their biggest sale of the year for back to school. Use the coupon code 6392 for 20% off any non-sale item! bit.ly/2Usm24T Coupon valid ‪through 8/31/2021 for one-time use in stores or online. Limit one coupon per customer. Not valid on items with shipping restrictions. Other exclusions may apply. Visit bit.ly/3bbUXIj for details. #LearnwithLakeshore #ad #sponsored ... See MoreSee Less

Standard Form, Expanded Form, Word Form. Maybe not the most exciting math concept to teach, but definitely an important one…so why not make it fun and engaging?? 😄Guess Who math games encourage higher level thinking/reasoning and using math vocabulary verbally. They’re an instant favorite for math centers and early finishers!Find this game and others at bit.ly/guesswhomathgames ... See MoreSee Less